It took a while to figure out why WordPress kept rejecting this photograph (it turns out that I had saved it as a .tif file, which the website doesn’t recognize), but after a quick visit to Graphic Converter, I now have a decent .jpg file to share. This was nothing more than a quick snap during my February excursion to Ocean Beach, but the resulting composition looks a little interesting. I might crop a copy down to a 8×10, trimming the left edge, but it looks all right as is. 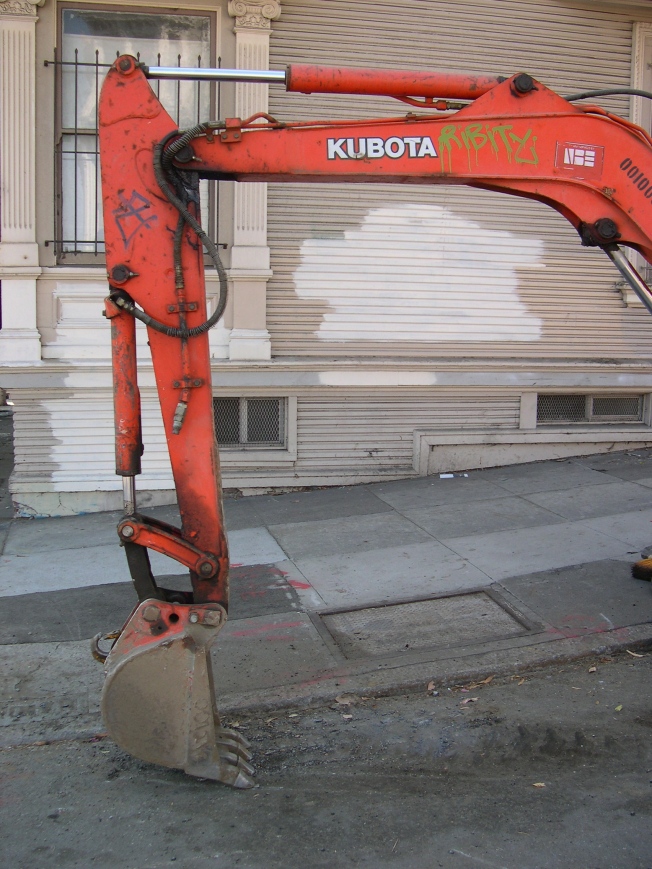 And now, the title of the picture: “So I Asked Him, ‘Have You Ever Thought of Your Machine as a Work of Art?’ and in a Thick Irish Brogue He Replied, ‘Aw, That’s the First Time She’s Ever Looked Pretty to Me.'”

Seriously, that is the title of the picture. As is my wont, I had walked around San Francisco all afternoon, and this was the most interesting thing I had seen all day. He had seen me taking photographs of this little orange critter and interrupted his lunch break to demand what I was doing. Maybe he was concerned that I planned to steal or vandalize it later. I showed him the pictures I had taken (this is the only one I preserved), and we engaged in the above dialogue. He didn’t want me to email the picture to him, however (perhaps he was an acute critic?).

I’ve thought about our exchange ever since.

Perhaps all of these factors must come into play, which makes things interesting because that might imply the photographic work of art must begin with the object being photographed, and the object itself must be art. So there it is, a graffiti-stained backhoe. Art? Or not?

I’m trying to figure out exactly what the man (I’m convinced it was a man) who posted this cardboard sign on a tree at Market & Fifth Streets wanted to communicate. I was on my way home, having taken BART from Berkeley to the Powell Street Station, and I had trotted up the stairs to Market Street to await a ride at the Muni bus stop. I didn’t have time to take more than a few shots, of which this is the clearest: 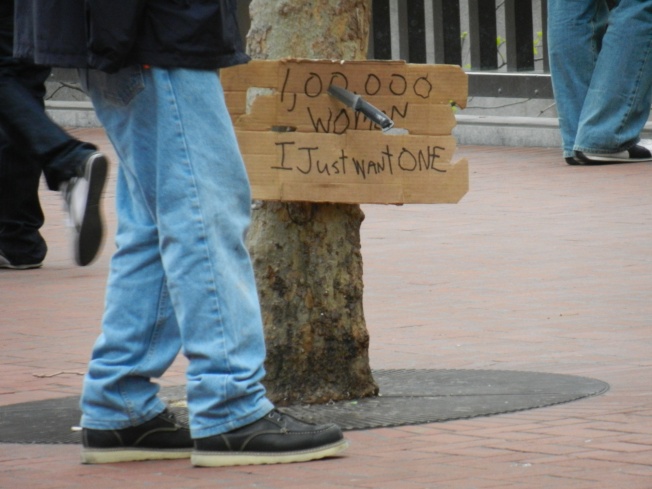 Yes, that is a Bowie knife (http://en.wikipedia.org/wiki/Bowie_knife) pinning the sign to the tree. Rather a mixed message, I hope. Please, let this be a mixed message and not a clear one.

13 Chihuahuas. At least. As I was withdrawing money from the ATM, two men with their entire pack of Chihuahuas walked past on their afternoon stroll.

I know what you’re thinking: how can two humans walk 13 Chihuahuas (at least) at the same time?! Needless to say, if you intend to walk at least 13 Chihuahuas at the same time, you need a plan, and these two humans had a good one. The lead human kept one Chihuahua in a pouch on his chest, allowing the dog to look forward. His left hand held three leashes, accounting for another three dogs. His right hand dragged a little red wagon behind him, carrying four more Chihuahuas. The other human walked the remaining 5 dogs, each on its own leash, three in his right hand, two in his left. At least four of the 13 Chihuahuas (at least) snarled at me as they walked past. Yes, they were itching for a fight.

I bet no one ever gives these guys trouble. Think about it; who on earth would want to be the first mugger to receive a Darwin Award(tm) for being nibbled to death by Chihuahuas?

I had yet another perfect strawberry this past weekend. I know I don’t have to describe the perfect strawberry, because you already know. There were other strawberries in and on the stack of pancakes, of course, but one stood out as everything you and I have always loved in the berry. And as I bit into this perfect strawberry, memories came back to me, long forgotten, as they did to the narrator when he bit into his Madeleine in Marcel Proust’s famous novel.

San Franciscans are spoiled; we have access to locally grown strawberries for all but 6-10 weeks of the year. They were much rare in New England where I grew up. At best, you could find fresh strawberries for only 3 months each summer. The first memory was of my first job, working in a restaurant kitchen one summer in Vermont, where one of the first head chefs there had formerly been the chief nutritionist to Her Majesty Queen Victoria of England. When the first strawberries arrived in the kitchen, the assistant cook immediately proclaimed that he immediately had to “inspect” them immediately. Did I mention that he had to “inspect” them immediately?

“I love strawberries. They’re my favorite food,” he said as he savored a mouthful of three. “So what if I’m allergic.”

“Wait a minute,” I said. “You’re allergic to strawberries?! Won’t that kill you?!”

“So how do you deal with that?”

“You can’t. I just go around with hives for two months of the year. It’s cool.”

OK. If he insisted, and he did, then it was cool.

During college, I picked up a little extra income working at a restaurant in Philadelphia that had a peculiar problem every Valentine’s Day. Our customers/fans were passionately fond of what we called Strawberry Heart Tarts, heart-shaped tarts layered with dark chocolate and cream cheese filling on the bottom and filled with strawberries coated in raspberry jam. As Screamin’ Jay Hawkins once said, if the people want it, then the people must have it, so when the people wanted the tarts for their Valentine’s Day dinners, we had to provide them. The trouble was that it was impossible in those days to find strawberries anywhere in the United States in winter, except for a few in California that were very, very, expensive.

However, winters in the Southern Hemisphere are very, very, warm.

So we imported strawberries via air freight from New Zealand. Every bit as crazy as it sounds, but we had to have them. New Zealand’s berries are outstanding, and the restaurant simply passed the cost of air shipping onto the customers, who didn’t care because they were in love. But you can’t ship such fragile berries over such long distances without losing many to bruising, rot, or that fuzzy white mold that looks like a beard. So when the ten flats of NZ “strawbs” arrived, everyone who could be spared had to stop what they were doing and inspect every single strawberry. After removing the unusable ones, we had maybe 2/3 of the shipment left. Our First Cook would look at his minions as they gazed wide-eyed and drooling at these perfect berries, and he would say that he officially and hereby imposed a “Strawberry Tax.” We had to make sure they tasted right, anyway, so we all got “inspect” one berry. Since the New Jersey berries would not get harvested for months, we savored these.

Good memories. And all evoked by a single perfect strawberry at last Sunday’s brunch.

Good Evening:
A barber at the hair salon, with one of those bellies that make a man look pregnant: “I have gotten so fat. When I took cocaine, it was easy to lose weight.”
Vonn Scott Bair

Good Evening:
I heard today of the passing of Jake, an all-white English Bulldog who hung out in front of his human’s place of business, a hair styling salon in the Upper Haight. Jake was the most placid fellow I’ve ever seen, a dog who didn’t even need a leash to keep him in place. His calm demeanor made him ideal for the neighborhood. No matter what humans passed him, no matter how many, no matter what they did or how they dressed or what noises they made, nothing could even begin to disturb an equanimity that even Buddha would have envied. He let the humans pet him, receiving their affection with serene dignity, never pandering or begging for their attention. He was eleven years old, quite elderly by bulldog standards, and must have enjoyed the human circus parading before him. Jake was a good fellow and a solid mensch. RIP, you good boy.
Vonn Scott Bair