The man with the cell phone welded to his ear walked to the wrong spot at the wrong time–about 10 feet into the street near Castro & Market. But the driver of our 24-Divisadero bus (African-American, 50-ish, dreadlocks) had skills that equaled his alertness and swerved around Mr. Cell Phone, who had no idea that a bus almost as big as a Humpback Whale had to duck around him. One of my fellow passengers said, “Idiot has no idea we’re here, he’s stoned out of his mind. At least he’ll die in the right city.”

At which point two college-aged Caucasian girls, both with boots over blue jeans, one with a yellow sweater, the other with a yellow-and-white scarf, boarded the bus, Ms. Sweater checking the NFL scores (“Omigod, the Jets suck! Oh, no, my Saints lost!”), whilst Ms. Scarf tugged on Ms. Sweater’s arm and asked her, “Hey, that guy on the sidewalk, is he eating a banana?”

The bus driver, who possessed peripheral vision equal to his skills and alertness, said, “Ladies, that is not a banana.”

Ms. Scarf said, “I wonder if that comes in chocolate.”

To which I can only add, welcome to my town.

This one might be a bit challenging because of the paucity of colors. First, as usual I found yet another great San Francisco mural–not too hard to do in the city with more murals/acre in the state/country/continent/world, depending upon which local myth you prefer. Second, I took a series of closeup pictures to produce my own instant abstract art. Here are four: 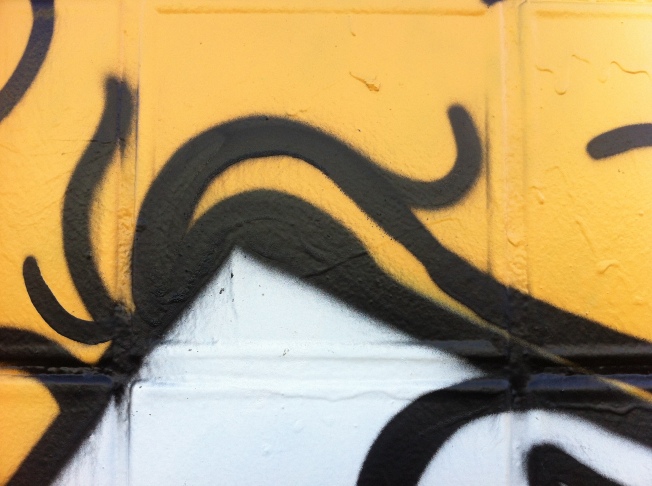 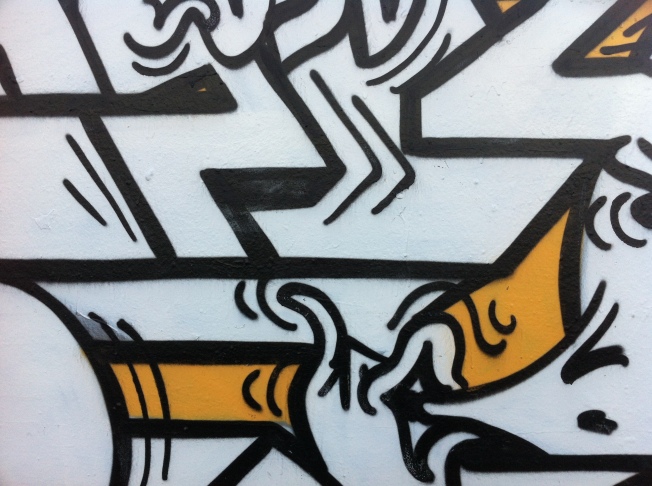 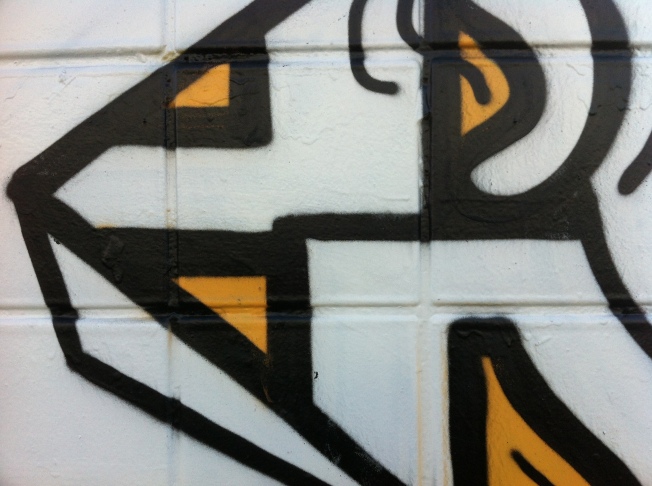 And now here is the entire mural: 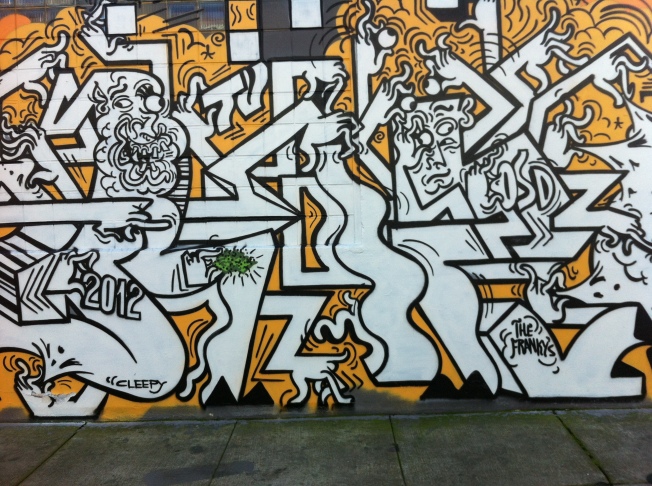 As before, the challenge consists of this: can you locate the sections of the photograph that appear in the four closeup pictures? I don’t think this will be too hard. Have fun!

The folks at Automattic (in other words, the folks who gave us the WordPress universe) hosted one of the hundreds of 12/21/12 Mayan Apocalypse that dotted the city of San Francisco like sprinkles on an ice cream cone last Friday night. Located high up in one of the very few office towers on Mission south of 16th Street, they have a great view of the neighborhood: 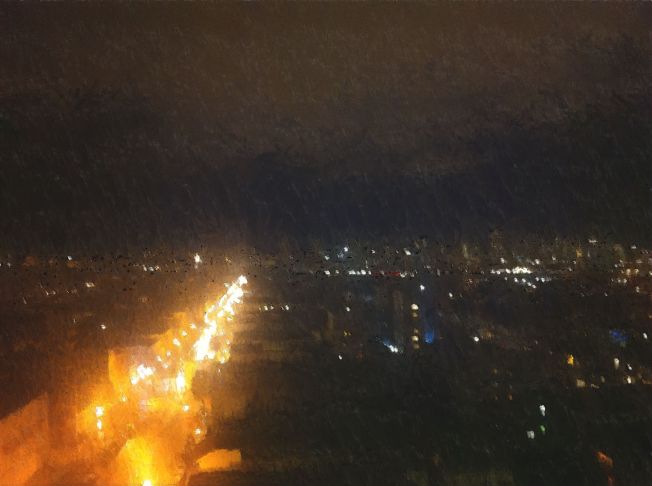 Automattic does PR right; the people who work there treat everyone decently, take all your questions seriously, and don’t condescend to anyone. More important, they provide ample supplies of free pizza and beer. Turns out that I was one of the few bloggers present; most people present develop for the WP universe.

This became an issue as I discussed baseball with G___, one of the developers. We sat opposite to each other in two sofas talking when an impeccably cute Asian woman half my age bounced onto my sofa, clutched my left upper arm with both of her hands, and told me that it was so great that Automattic hosted events like this where developers and app creators could meet and share their ideas.

“No, but G___ here has created apps and themes for WordPress, and…”

Before I could finish, the impeccably cute Asian woman half my age bounced off my sofa, bounced once off the floor, bounced onto his sofa, clutched his left upper arm with both of her hands, and told him that it was so great that Automattic hosted events like this where developers and app creators could meet and share their ideas.

The accidental Cupid, having done his job, left.

Those gosh darn Geeks are just too gosh darn sexy for me to compete.

Still more mysterious objects seen on San Francisco walls. All of these pictures are exteriors taken with my iPhone 4. 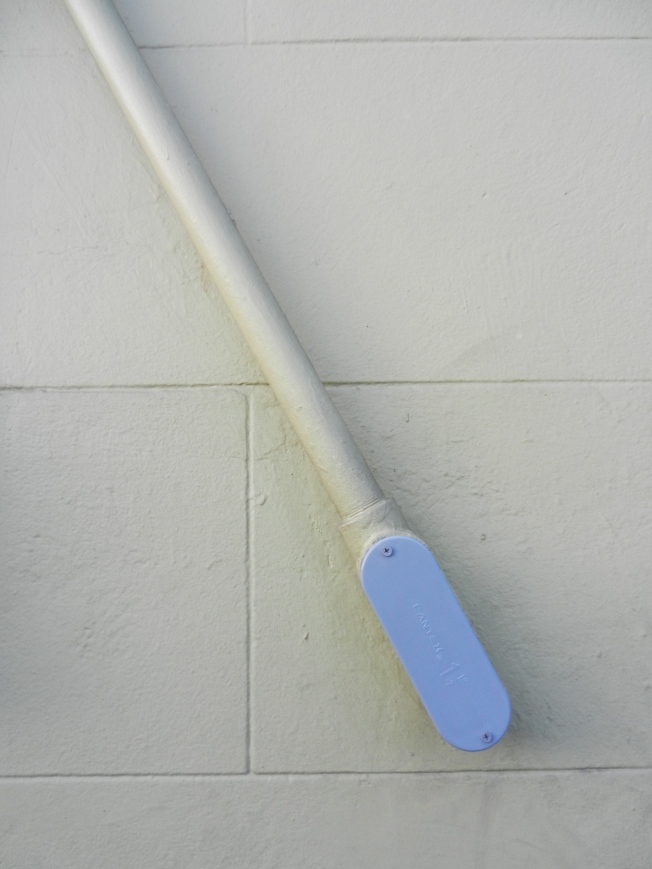 I see a lot of these on exterior walls in San Francisco, long pipes, one inch in diameter, with that pill-shaped cover on the end. What they are and what they do remains a complete mystery to me.

I hope you enjoy wondering what the heck they are as much as I do.

Our own City Hall, in the holiday spirit.

1. Multiple personalities in the sky.

Walking up Van Ness Avenue in front of the west entrance to City Hall: brilliant lapis lazuli sky overhead, sunshine on my back, a rainbow to the west–and rain dumping on my 52″ umbrella from the east.

I did not know how else to describe it.

During another one of our seasonal rainstorms, the weather suddenly broke and the sky lightened, although still overcast with an even layer of clouds. But the eastern part of the building across from us on Redwood Alley (the Superior Court building) remained shrouded, whilst the western half brightened considerably. But the same sun shone down equally upon the east and the west. Why did one part of the same side turn bright and the other remained dark? One of my co-workers, an excellent photographer, joined me at the window to discuss the odd phenomenon.

“What do professional photographers call this?” he asked.

Cigarette Break in the Rain, Redwood Alley, San Francisco (taken with an iPhone 4, I deliberately pixelated the picture by cropping and blowing up the digital file to create almost a pseudo-watercolor effect)

You might have noticed that I have an enormous umbrella; 52 inches at full expansion is huge and requires 16 ribs to hold it together. Even in San Francisco, I do not often see its like, and still more rarely do I see its like in something other than black. Therefore, I noticed the 52 inch light yellow umbrella, rather like French Vanilla ice cream, also with 16 ribs, black, at the westbound bus stop at Haight & Divisadero.

But it wasn’t raining.

In fact, the young woman in her twenties who had opened her umbrella stood in the bus shelter; even if it had rained, she did not need her French Vanilla umbrella. But this five foot eight inch tall woman with an olive Mediterranean complexion kept her light yellow umbrella open behind her head, highlighting her long wavy black hair, olive complexion and wide smiling mouth. 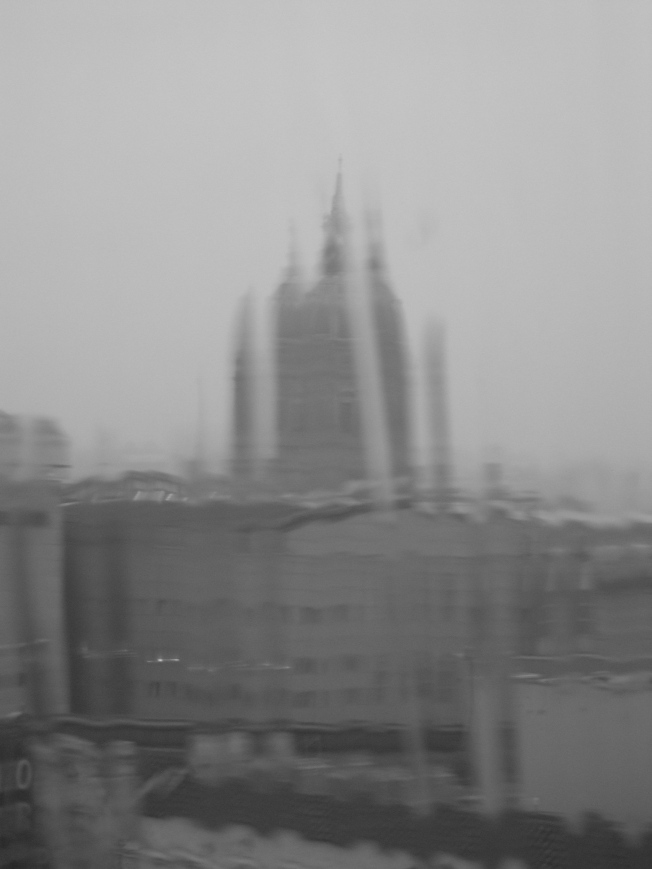 City Hall During a River of Rain, Black & White

I am not a snob of hot chocolate. If you use a mix to create one of the best reasons and excuses for a winter day, I will not excoriate you with verbose bellicosity or ever worse, use subtly ironic demeaning sarcasm as an assassin uses a stiletto. You don’t have to create hot chocolate from scratch, as wonderful as that tastes and feels. I have a few favorite mixes myself, from Penzey’s and Lake Champlain Chocolates.

But I must insist upon milk.

“Just add water” just doesn’t work. Have you seen that junk? It’s grey chemicals. You dissolve grey chemicals in hot water and then pour them down your throat. Yuck! Pardon the high-falutin’ language. And those grey chemicals are not even the beautiful underrated shade of grey that I like so much (see here and here); this grey looks toxic.

If you do not want to risk ruining hot chocolate by accidentally boiling the milk (I like to add half-and-half or cream for extra richness), and you lack the patience to stir the chocolate constantly, a simple solution exists. Use a double boiler. The double boiler is one of my favorite tools in the kitchen, one I use for roux, cheese sauces, Alfredo sauce, and especially for hot chocolate.

Jesse Colin Young enjoyed a brief vogue in my Connecticut high school during the early Seventies for his solo albums Light Shine and Song for Juli. He should have enjoyed huge worldwide success on a par with other California artists and groups of the era, but never mind. “California Suite: Grey Day” and “Ridgetop” remain two of my songs for “rotten outside, paradise indoors” days (in fact, I’m listening to the saxophone solo in “Grey Day” right now). The funny thing is that the music felt perfect watching the New England snows of January, when after 30 years in San Francisco it becomes obvious that Young lived in either Marin or Sonoma County when he released the two albums. One comment by “KINDOY2” on a YouTube video cites Point Reyes Station (an unincorporated town near Tomales Bay) as his home at the time. 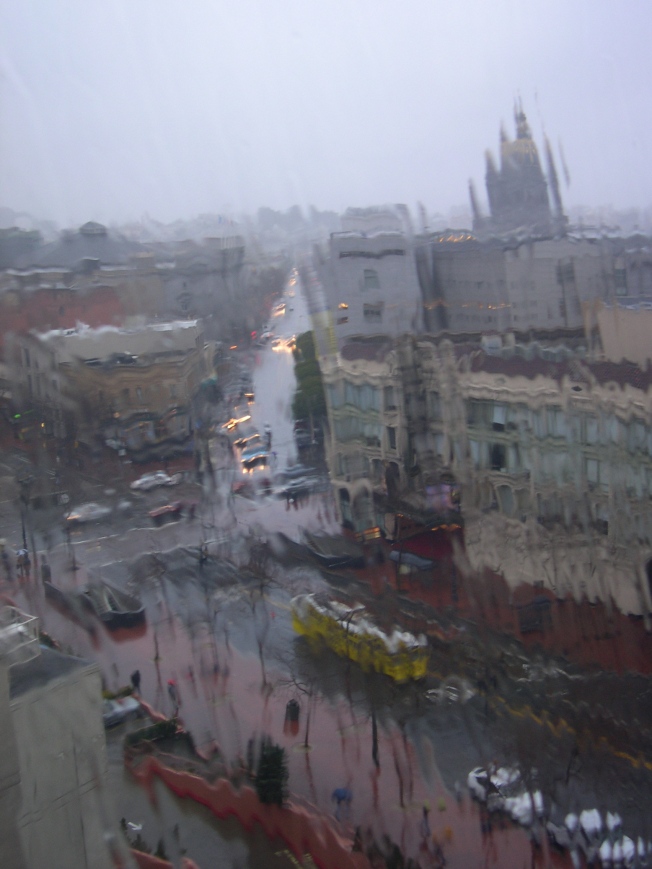 San Franciscans sometimes use the term to describe a day like today, Sunday 23 December 2012. Depending on the storm system, the rain changes: straight down and hard; from the west at an angle; steady from the north; light enough for the wind to shove every which way; driven almost parallel to the ground by the violent winds in the Financial District; but one storm after another, rarely with a pause between storms. I cannot complain. Aside from the fact that we only need six weeks of rain to avert drought, aside from the fact that the remaining 46 weeks of the year we live in a beautiful “cool summer Mediterranean climate,” I think the bad weather  helped San Francisco develop, establish and maintain its reputation as one of America’s literary capitals.

On a day like today, of course you remain indoors and write a poem, a play, a novel, a blog post. What else can you do? Well, you could make hot chocolate. Which has begun to feel like a very good idea.

All four pictures taken today whilst walking on 9th Street between Mission and Harrison, San Francisco, using an iPhone 4. Two have received cropping and straightening, but no other editing beyond that. 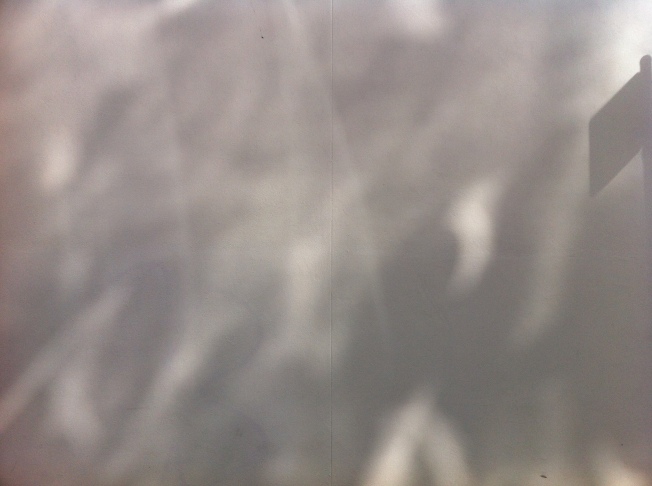