This year’s parade? Rather quieter. Years ago, I learned to beware the fallacy of assuming that personal experience = universal experience, but if my experience today holds true, the parade drew fewer people and resembled the well-behaved celebrations of old than last year’s wildly raucous and well-behaved celebration of new. Furthermore, last year’s parade universally celebrated gay marriage; this year’s went all over the map.

For example, some folks celebrated being gay and in love: 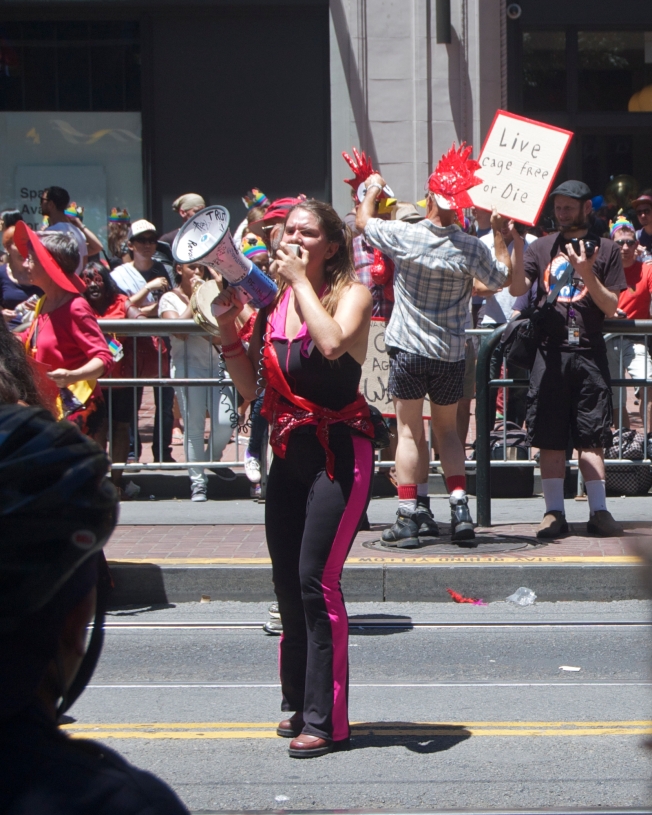 I had to work hard to find a single picture with contrasting elements. This was my “best” success.

Gay libertarian gun advocates with rainbow Gadsden Flags. Those contrasts might make the heads of some non-San Franciscans explode, but it makes more sense here. Gay bashing remains a problem, and the Pink Pistols advocate gun ownership so that gays can defend themselves against physical violence coming from homophobics. Or as the sign says, “Marry Rights/Carry Rights/Equal Rights.”

The organized anti-gay protestors with their big bright signs of years past have disappeared (correction: this is the second straight year that I personally have not seen them), but I did see this gentleman who, like our Silent Preacher (didn’t see him anywhere this year), prefers to keep quiet and let God’s words do the talking. When I walked past, a number of other photographers were taking his picture, and he did not mind at all. Interestingly, it is not at all obvious that he is anti-gay. In another contrast, he was the quietest person at the parade. 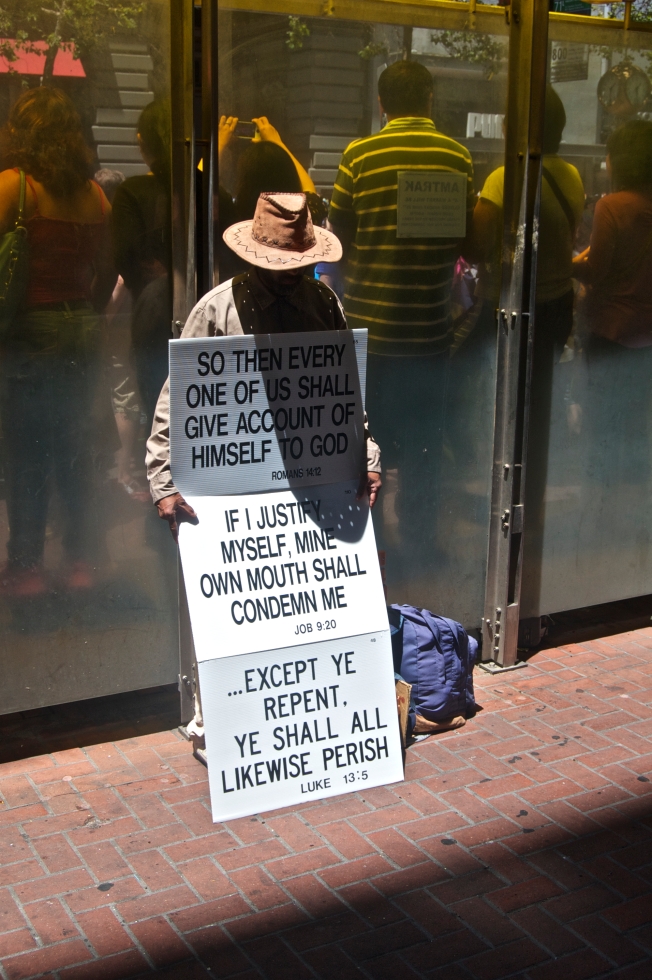 However, a few other Christians made a contrasting amount of noise. 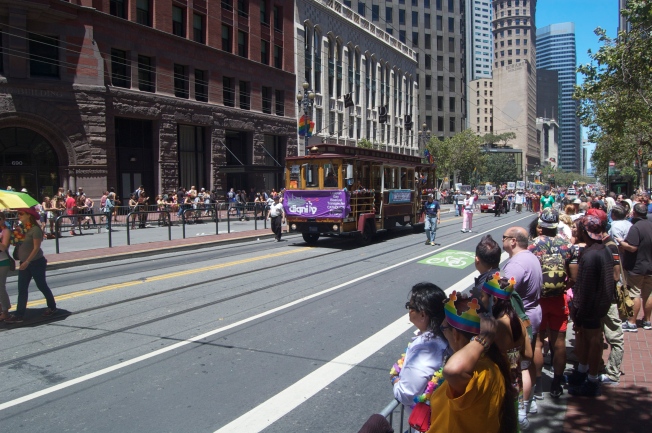 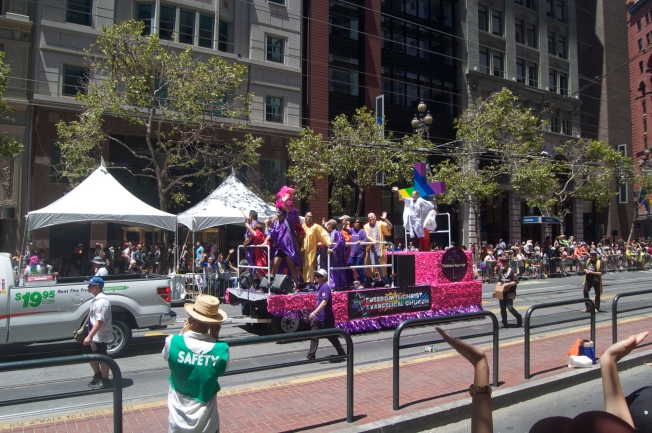 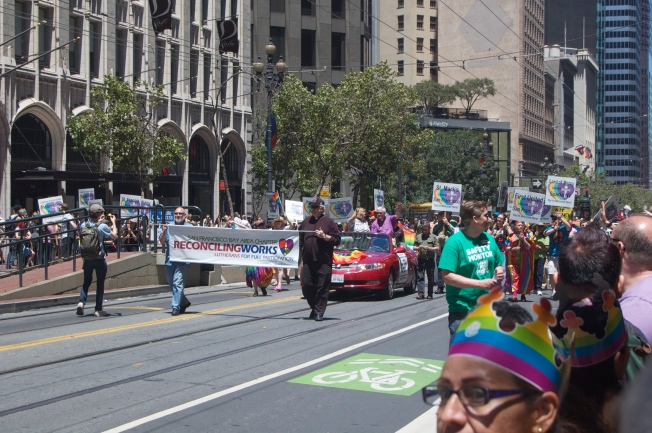 We Will Marry You!

The Episcopal folks had quite the advertising slogan, didn’t they?

The commercialization of the parade continues unabated. I will let others debate whether the virtues of corporate acceptance outweighs the vices of corporate exploitation, but I will point out that the most popular fashion accessory I saw consisted of these:

Again, I caution both my readers and myself against taking my own observations for universal experience, but this year’s parade seems to represent a return to the norm; a fun annual get-together for all kinds of people (heteros definitely outnumbered gays this year) and all kinds of families.

This week’s Photo Challenge is inspired; so stimulating to the imagination, so easy to find examples, and yet coming up with something both different and well-photographed will prove so uh, challenging.

Saw this cigarette break from the third floor at work.

What intrigued me about the scene was that this full-color shot came out almost entirely B&W, with the exception of the flesh tones. For this week’s Challenge, we also have the contrasts of sunshine vs. shadow and light vs. dark. Looking forward to the weekend’s output; I anticipate seeing some excellent contributions.

And one more thing about San Francisco. We have tiny universes here. Little nooks, crannies, alleys, backyards, and miniature parks that popup in the middle of your perambulations, taking you by surprise. 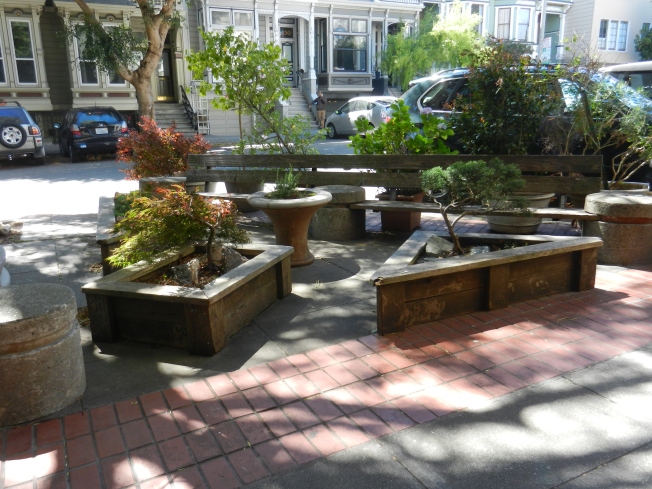 You can find these in the same stretch of Noe Street as Reason #822,200, a small collection of even smaller parks and even smallest sights. In this part of Noe Street, the residents work together to maintain the mini-parks and assorted greenery, which means they also end up relaxing on the park benches they maintain.

And that’s when residents become neighbors.

Nah, it probably isn’t, but it’s the smallest I’ve ever seen. 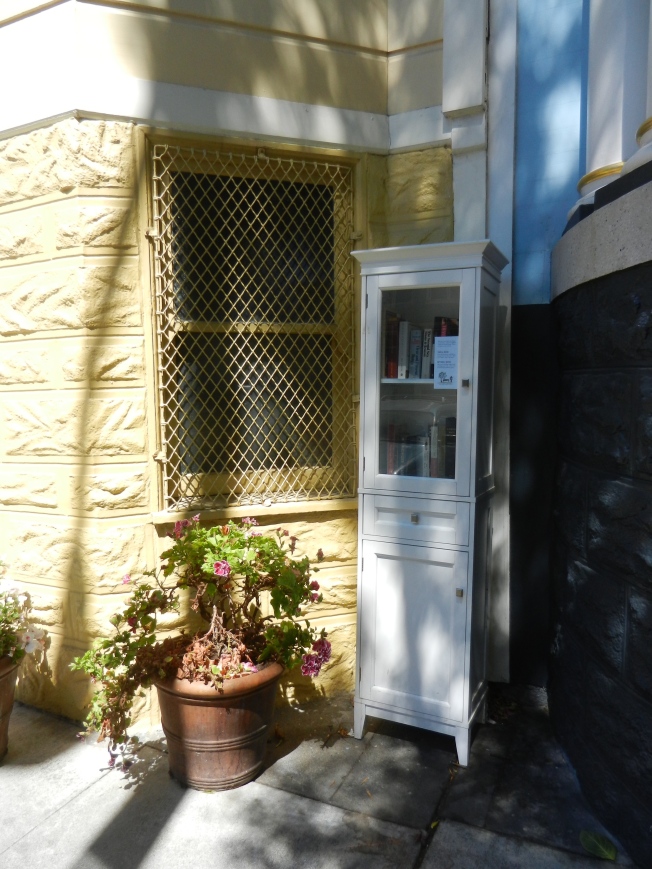 The first four blocks of Noe Street rank among the most picturesque and unknown beauties that even most San Franciscans haven’t visited. As this library can attest, Noe Street can have a real everyone-knows-everyone  neighborhood feel. Check out the only rules of this library.

I’m guessing here, but this might be legal in San Francisco.

He wore a mask, a necktie, socks, sneakers and a handbag. And not much else. In fact, the only other item he wore was a sock that covered his um, er, uh–his rhymes-with-sock.

He didn’t seem to mind that people noticed him or pretended that they didn’t. 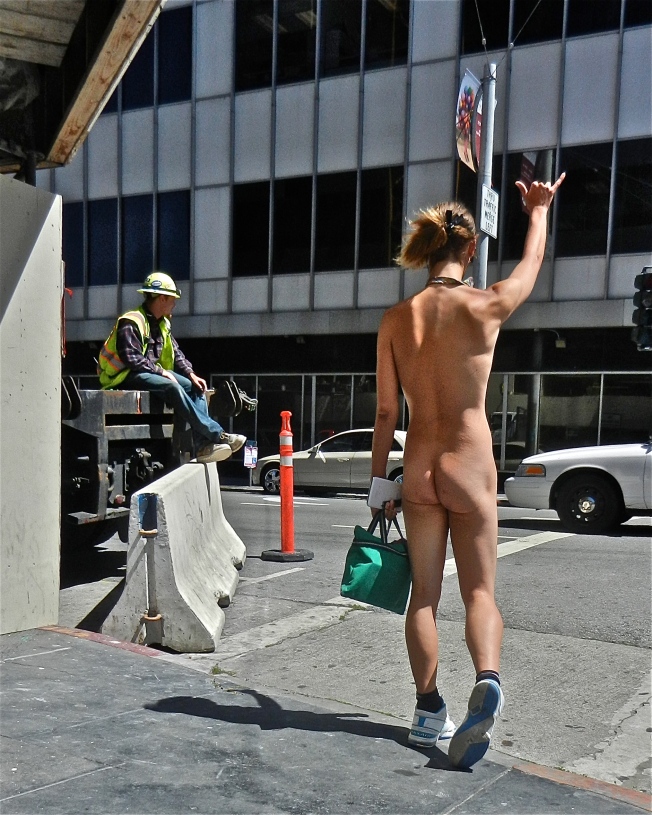 Welcome to San Francisco. Where we call this business casual.

I still have not discovered the person who first said or wrote, “The surreal is that which lies at your feet,” but I found another example of sidewalk art today. This particular writer has a unique style of handwriting, and you cannot mistake him or her for anyone else.

Shawnty has a distinct style of writing: very short poems, almost but not haiku, and mysterious, evocative imagery that lends itself to multiple interpretations.

This and the next three posts all came to me in the course of two hours during my errand run. I will publish them in the order in which I encountered them. This just happens some days; San Francisco just wants to show off just how much San Francisco is San Francisco.

Good Evening:
I visited the East Coast this week to attend the high school graduation of my niece. I graduated high school in the year MTLA, a Roman numeral that equals Much Too Long Ago, and things have changed a lot since then. Oh, have they ever changed a lot since then:
1. My graduation ceremony did not have at least eight cops patrolling the event. Actually, we had zero.
2. My graduation ceremony did not include a weapons check.
3. My graduating class did not include a blind student.
4. My graduating class did not include two wheelchair students.
The more I think about this, the more baffled I feel. I feel shamefully ignorant; I can’t tell you what happened to disabled/differently abled children in that America. Such students simply didn’t exist in my world, unless the wrestling team competed against schools for the deaf or blind. Who knows where the wheelchair-bound went? I don’t.
5. The Salutarian (sp?) referred to his gay and lesbian friends in the student body. In Roman numeral MTLA, homosexuals did not exist in high school; seriously, you did not know of their existence until at least college, possibly later. I should correct myself. All I knew about gay people is I didn’t know that my classmates secretly thought I was gay until I, uh, shall we say, accidentally proved them wrong.
6. My graduating class was 95% white, 4% Asian, 1% black. My niece’s class was Hispanic, African-American, white and Asian. In that order. The demographics are changing and those who don’t adapt will fall behind.
No question about it; the need for cops and weapon checks disturb me. And yet the acceptance of a greater variety of differences among students seems to indicate genuine hope for our future.
It seems that every day I learn that I don’t know something counts as a good day. Now if I could just learn it, preferably before my age equals MTLA…
Vonn Scott Bair