San Francisco has gotten hit with a huge El Nino in recent days, one downpour after another, with only slight respites of light drizzle and the occasional sunshine. At the San Francisco Public Utilities Commission, where I work, we go around with sheepish grins and tell each other, “This weather is terrible! Isn’t it wonderful!” Whilst it remains unlikely that a single wet winter will completely undo the drought, most San Franciscans feel a bizarre combination of irritation and delight.

Not so much our homeless population.

Finding any means of protection however slight against the elements becomes more difficult in weather like this. For this reason, large numbers of homeless have sought refuge under the overpass along 13th Street in the South of Market neighborhood. I would guess that the number of improvised shelters have quadrupled. Any amount of protection will do, but some pieces of real estate have more value than others:

Even these lucky ones cannot completely avoid the wet.

Others make do with partial protection.

Worst of all, no matter how well meaning, any and all attempts at solutions seem to consist of and/or end in shouting, blame and lawsuits. Anyone can see that San Francisco’s recent prominence in the national consciousness results from the fact the income gap here absolutely dwarfs the income gap nationally, and one nightmare scenario consists of America turning into a middle-class-free version of San Francisco, containing the few extremely rich and the many extremely poor. I took that quick and easy quiz in the previous link and discovered that nationally my income was slightly above average and places me in the 57th percentile, an excellent result when you have all of The Good Zeroes: zero kids, zero cars, zero drugs, zero mortgage, zero debt.

However, by San Francisco standards my income fit in the 38th percentile. Lower middle class.

Well, I have defenses, but most people don’t.

So whatever you see in these pictures, wherever you live, it can happen there.

The wind and rain in my neighborhood have just take a turn for the heavier.

At about 11:15 a.m., on a stretch of Market Street from 10th Street to Van Ness Avenue, in the space of three minutes, I watched four homeless men (all Caucasian males who looked 40-50 years old) separately and independently walk into heavy traffic, indeed, they walked into heavy traffic towards the heavy traffic. 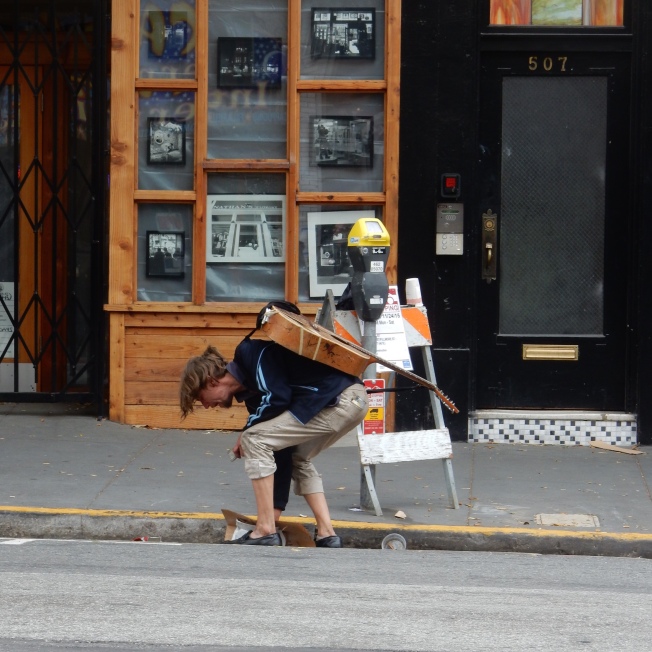 I have no idea what I saw.

I might have seen four almost simultaneous attempted suicides. In fact, the 14th time I saved a human life involved a man who was attempting to kill himself by walking into traffic. Incidentally, none of them got hit, not even close, not even the one at Market and 10th who wandered into oncoming traffic in four different lanes.

It just boggles the mind that so many homeless have hit upon this method of attempted suicide.

When four homeless men wander into traffic in such a small area, the possibility exists that a tainted batch of the current cheap street drug has warped their minds. Or it could have been just a coincidence that four perhaps mentally ill homeless men happened to wander into traffic at the same time. Unless this was a perverse version of Russian Roulette–maybe they get killed, but if they get injured they can try to sue drivers.

It just doesn’t seem possible that one person witnessed four strange events almost exactly alike in such a small time frame. Five, if you count my 14th. Honestly, I have no idea what’s going on. Seems like some kind of bad craziness taking hold in San Francisco.

Unless it was all just a coincidence.

I don’t know what I saw.

Having lived in San Francisco 33 years–at least 4 times as long as I’ve lived anywhere else–you may safely conclude that I love this place, and normally, The San Francisco Scene–Seen! tries to stay positive and focus on the interesting, the amusing, the beautiful. Ideally, all three.

But no one can deny that sometimes, San Francisco fails. And I feel that I would lie to you if I didn’t say so.

The bus stop for the 21-Hayes and 19-Polk buses in front of the Orpheum Theater at 8th and Market has become a popular social gathering spot, for lack of a better term, for the homeless who spend their days at the Civic Center. Most of the time, they don’t do anything worse than public inebriation and denying seats to the elderly.

This guy went a little too far.

I took this first shot because of the conjunction and contrast of the very young schoolgirl standing with a backpack and the passed-out drunk lying on the sidewalk. A contrast of red and pink vs. blue, young vs. old, a girl with a future vs. a man whose best days had passed. Then some sort of commotion began and I thought that maybe I would need to escort the girl from trouble.

The man had awakened and stuck his left hand down his pants. Obviously the two sitting people looked uncomfortable and I feared that he intended to do something perverse–indecent exposure, perhaps–to the girl. But before I could intervene on her behalf…

…false alarm. All he wanted to do was urinate. The dark line on the bricks extending from his crotch is a stream of urine.

The African-American person had decamped quickly. I had not seen the gentleman with the hat before (the girl blocks him from view in the previous two pictures).

“What are you doing, man?! Not here, not in front of my little girl! Find a bathroom, man, find an alley, find a tree, whatever, just don’t p*** like that in front of my daughter, man! Come on, sweetie, we’re going to walk down the street a bit. Man, you are disgusting!”

So no need for me to intervene. The father escorted his daughter to a safer location about ten yards away.

I once got in trouble back in Sunday School for asking the nun teaching class something like, “If you say God made us in His image, don’t you hurt His feelings?” So completely forgot about that until now that I didn’t even remember I had forgotten it. Guess I remembered because I can’t even hope to count how many ways this scene represents how many failures on the part of the species known as Homo Sapiens. I apologize if this blog post has upset you, but I respect my readers enough that I have to write the entire story of San Francisco, not just the fun parts.

I had hoped he didn’t see me.

He went hopelessly insane years ago, and I know little of psychology, but unfortunately it appears that nothing can save him. However, today did not count among my lucky days:

Immediately Before the Attack.

He saw me. And made me his next target for his next assault.

But this was no ordinary assault. 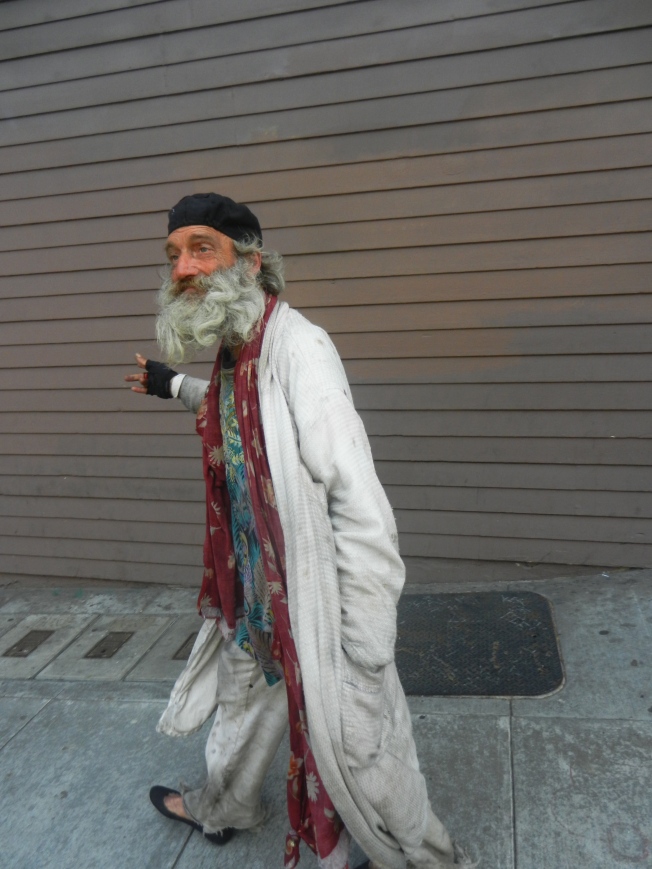 He assaults people by harassing them without saying a word, he hardly makes a sound even when he moves, circles his victims, makes threatening gestures for a few moments, and then moves one, but then moves back and repeats the above until his victims are thoroughly terrified. I have used my camera to chase off a thug threatening two couple, and then to chase off a homeless addict/alcoholic threatening me, so I tried it again. It sort of worked; he left me alone after one circle, then walked down the street not harassing people when he saw me continuing to photograph him. This might be my money shot:

Looks kinda like something that madman Winogrand might have taken. Aside from the first photo, I have not edited any of these shots (taken with my point-and-shoot), but I might crop the top and convert to B&W to see what happens. Here he is retreating from my camera:

I didn’t scare him away, but my camera did.

Saturday morning had me up and running early, performing chores. For starters, I bought breakfast for the actors, directors and playwrights participating in a 24-hour theater festival (where you write, rehearse and perform a set of short plays in 24 hours, and yes it can be done). No matter where I went up and down Market Street, I saw something like this:

At 7:00 a.m. on a weekend morning, San Francisco’s homeless are still asleep on Market Street. Something so obvious to me now to which I had been so oblivious before: old age. Our homeless population has aged before our eyes and now they have to cope with advancing years. 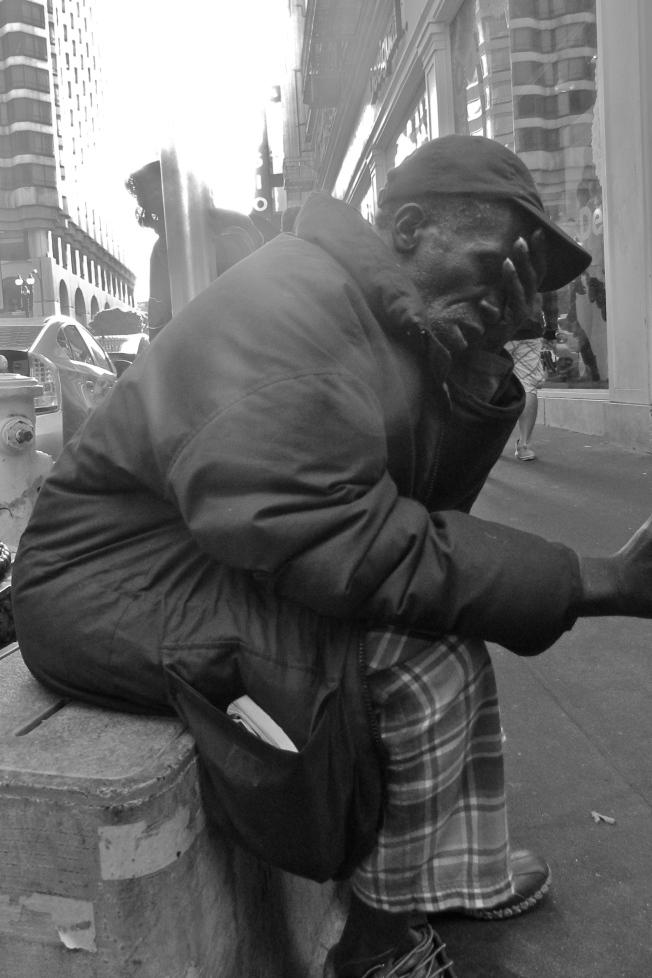 And with age comes increasing physical disabilities. Oblivious me, I had never noticed the canes and wheelchairs before. 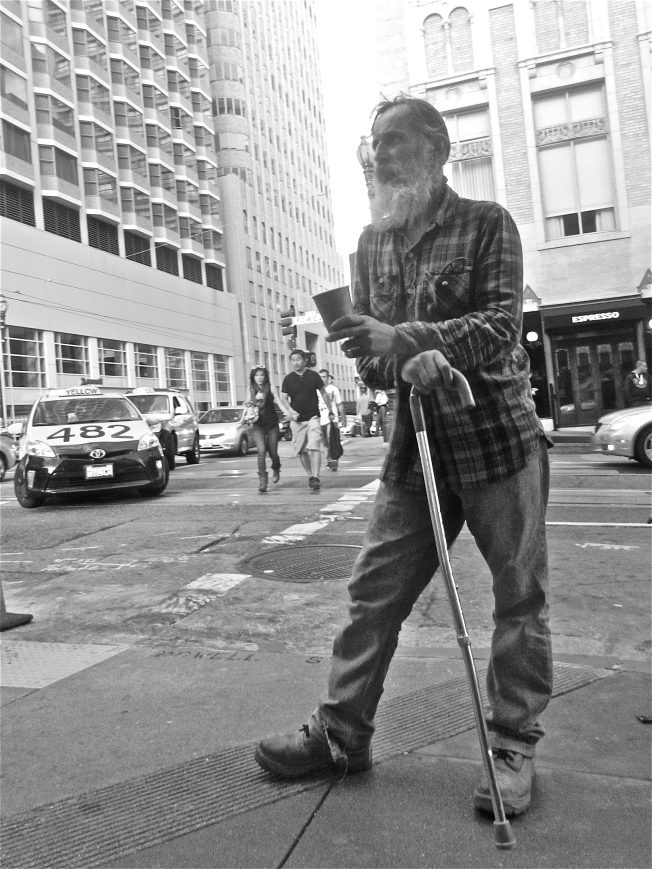 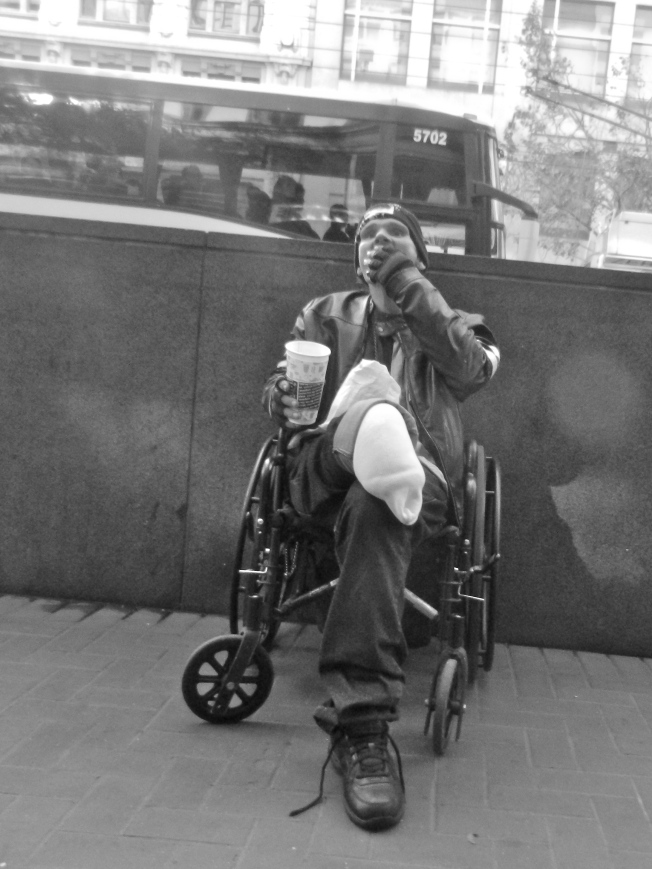 San Francisco has one of the largest gaps between the richest and poorest in America, and that gap becomes most obvious early on Saturday morning.

To a playwright, dialogues do not confine themselves to two characters; my personal record for a stage play consists of 13 distinct characters nattering away (in screenplays, eight). So I did not confine myself to just two pictures for this, my final post inspired by this week’s Challenge.

Besides, families come in all sizes and types. We have the traditional family… 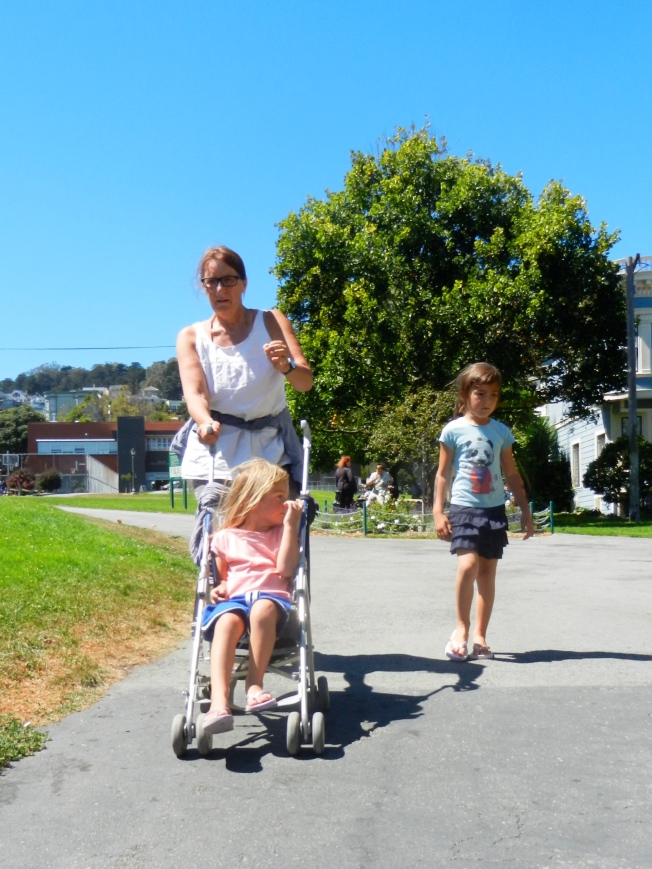 …and the new traditional family. 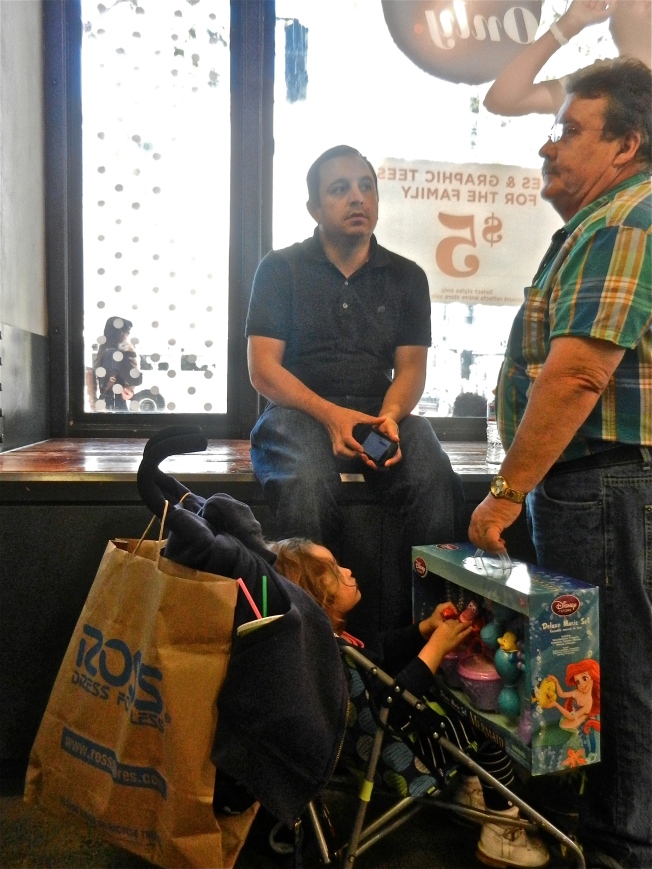 But family doesn’t have to be just about families. After all, you can make your own.

These folks are part of a musical family that have hung out in Golden Gate Park for more than 40 years. 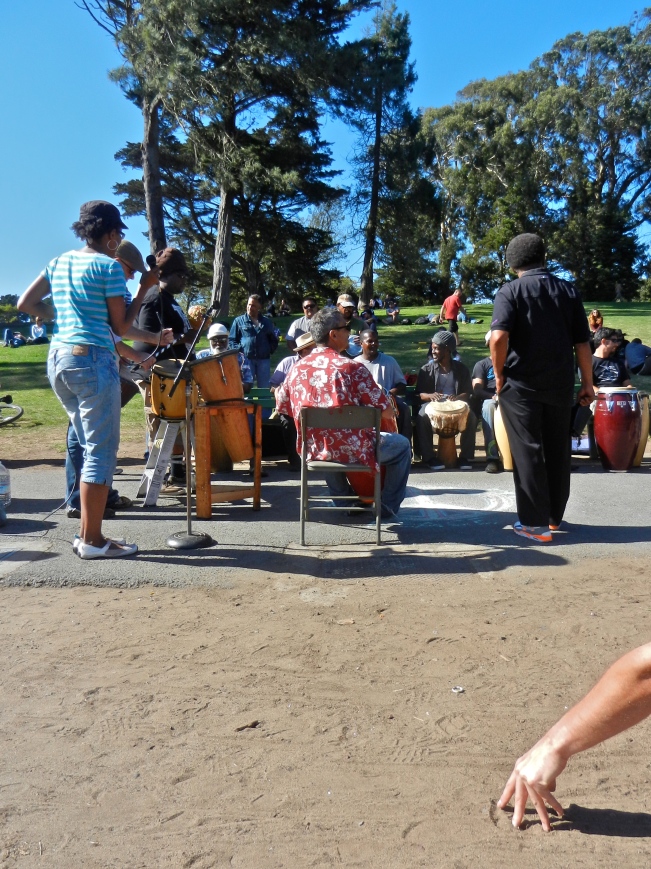 These gentlemen have their family, clan, tribe, or what have you. Their home? Wherever they can thrash. 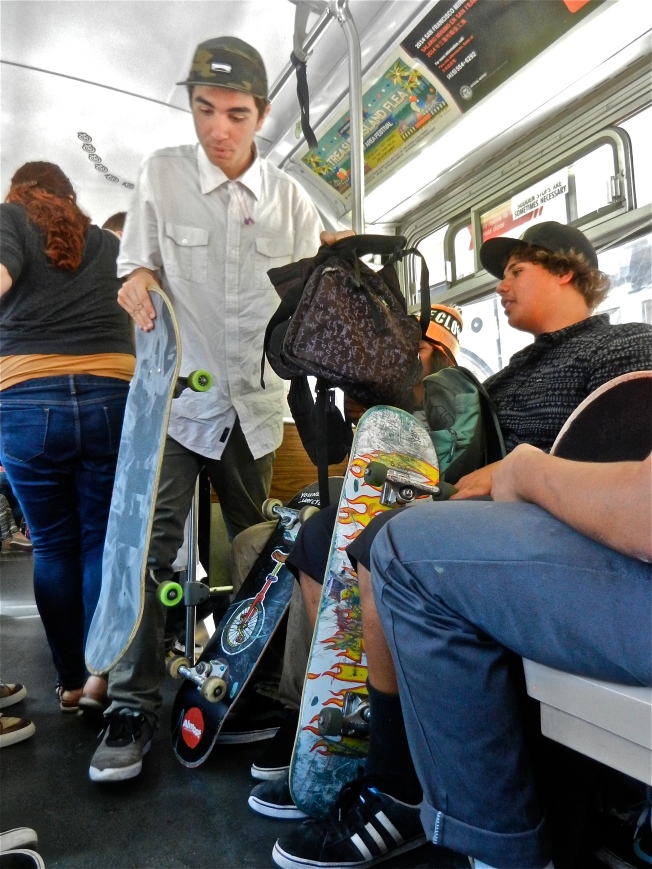 Skateboarders Headed for the Park, 31 August 2014

They are all they have, so even if only for a few hours, or perhaps a few days, or years, they make their family, although in this case, “mutual protection society” might seem apropos. But at least one can make one’s own family, whether for traditional reasons, shared passions, or mutual need.

I hadn’t thought of pictures as containing/producing dialogue among themselves before. It took quite a bit of thinking before hitting upon the notion of how playwrights such as yours truly use dialogue in the theater. Among other things, we use dialogue to yield contrasts among characters and/or conflict. Here is the first contrasting, possibly conflicting, pair of photographs for your consideration. I used my point-and-shoot digital camera, editing the shot slightly in iPhoto.

Now for my second picture, taken on the 21-Hayes bus with my iPhone 4, unedited. Hey, there’s a contrast right there. 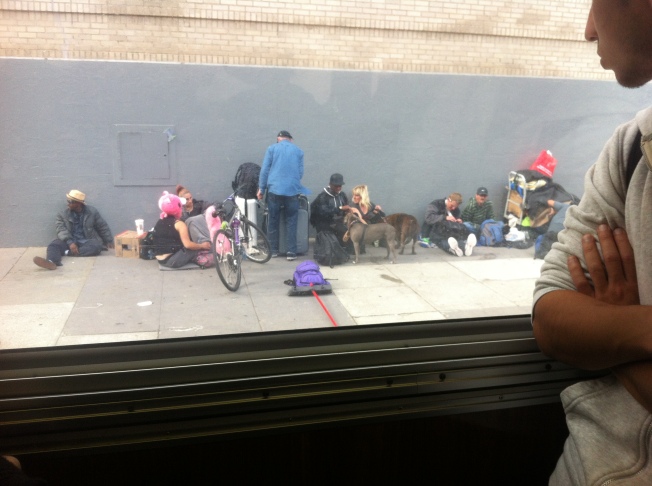 How many contrasts can you spot? There exist a few, and perhaps I haven’t detected all of them.