As soon as she boarded the 22-Fillmore at 16th & Guerrero, I wanted her picture. I wanted dozens of them.

Though perhaps five foot six inches tall, this Hispanic woman, about 45 years old, might have weighed more than I do (six foot two, 225). I mean seriously, dangerously, morbidly obese. She wore a black leather jacket several sizes too small, very tight black yoga pants, black leather ballet slippers, and a white top that was also a few sizes too small. This same top stretched so much and was made of such thin material that one could clearly see the push-up bra printed with a leopard-skin pattern except the bra was black and white like a zebra.

The finishing touch? The tiny pink Victoria’s Secret paper bag she clutched between her knees (each almost as wide around as a soccer ball).

In other words, a perfect picture that captures in a single frame the stories of obesity and bad taste in America.

Here is that perfect photograph:

I didn’t take any pictures of her.

Anyway, those are wild guesses, and they probably aren’t very good ones.

But the woman on the 22-Fillmore would have constituted a perfect subject for this week’s Challenge, and I chose not to photograph her. And that’s where the morality of street photography comes in.

First of all, the legality of street photography is not an issue in the United States. I had every legal right to photograph her.

But did she deserve that?

I mean, we’re not discussing something like Daumier’s Gargantua or Les Gens de Justice (which inspired an inspired animated short film called Daumier’s Law, well worth the search), in which he savaged public figures who had worked rather hard to earn his abuse. For all I know, this woman could be a perfectly decent human being who has a man who calls himself the luckiest guy on the planet. Does she deserve exposure to mockery?

And that’s why I didn’t touch my camera.

Some art repulses me because it doesn’t explore, study or portray everyday people, it mocks them. Ever hear of a photorealistic sculptor named Duane Hanson? I first discovered his sculptures at a major retrospective held at the Wadsworth Atheneum, where my dad worked during the Seventies. I met Mr. Hanson at a reception; he treated everyone kindly, even this teenage kid. But about half of his work seems to exist solely to mock people who might not deserve it. His best work? Brilliant and profound, like the construction worker eating lunch who has paused for a moment because he just realized that he hates his life. But Mr. Hanson also seemed to enjoy making fun of obese people, like the sleeping sunbather at the beach working on a cherry red sunburn, surrounded by empty junk food wrappers and bags, plus one empty can of diet soda.

Hey, don’t let me stop you; if you like this kind of photography, go for it. I won’t impose my prudery on your work, and I’m probably wrong to condemn mockery: you probably take brilliant pictures exposing the foibles and follies of ordinary people. I only want to describe my own evolving and ever-changing aesthetics, my own set of rules of what photographs I should take–aesthetics and rules that will likely change with time. I have simply grown leery of taking pictures of private individuals if it risks exposing them to mockery they don’t deserve.

Daumier attacked the powerful, even serving six months in jail for ridiculing the King of France (a man who deserved the ridicule more than Daumier deserved the jail cell). A woman wearing a black-and-white leopard skin push-up bra might not deserve the same attacks.

Had to run a few errands after work this afternoon, and when I run errands, my camera(s) run with me. My aim with The 30 Shot technique has sloooooowly improved ever since I started to experiment with taking candid street photography with my point-and-shoot, and I didn’t even crop some of these shots, let alone edit them (although I do feel the temptation to experiment in black-and-white or with filters).

It’s blurry and a little hard to tell from this angle, but the young lady with the cat’s ears and green ponytail also has a brown tail hanging down from her derriere. 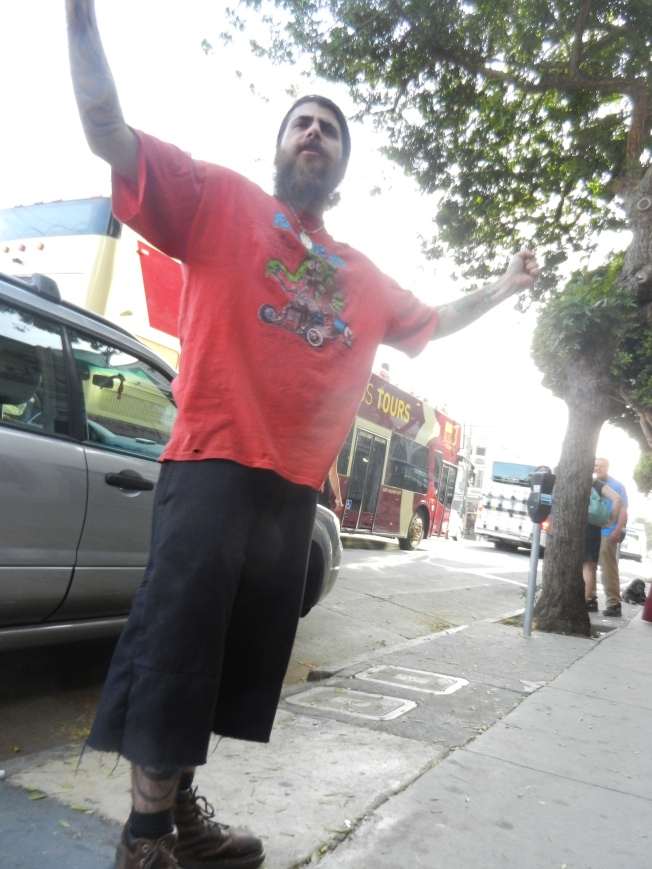 In San Francisco, books without booze is like Barnum without Bailey.

Hanging out in front of the local gourmet market. 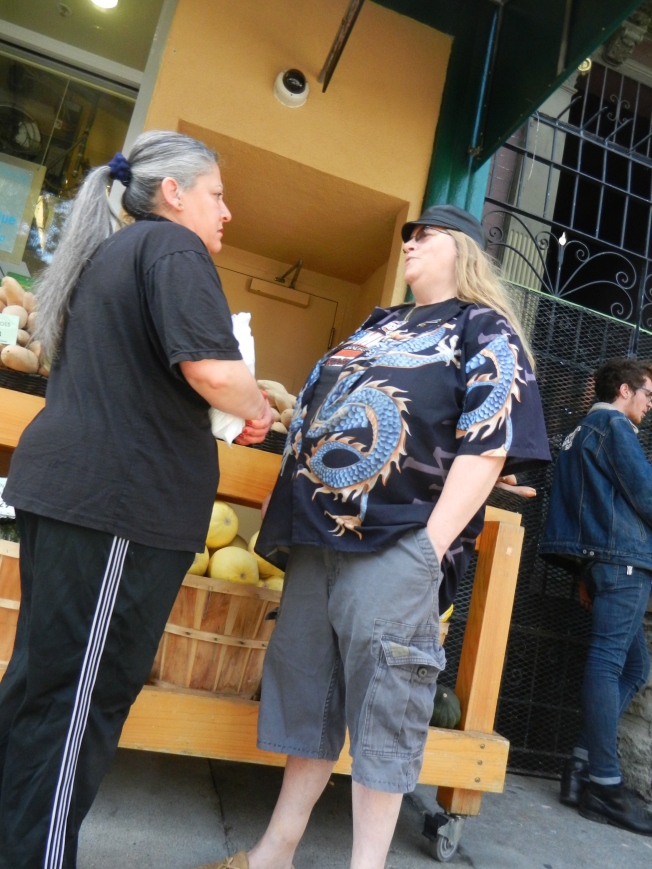 Tourists taking pictures of each other in front of The Red Victorian. 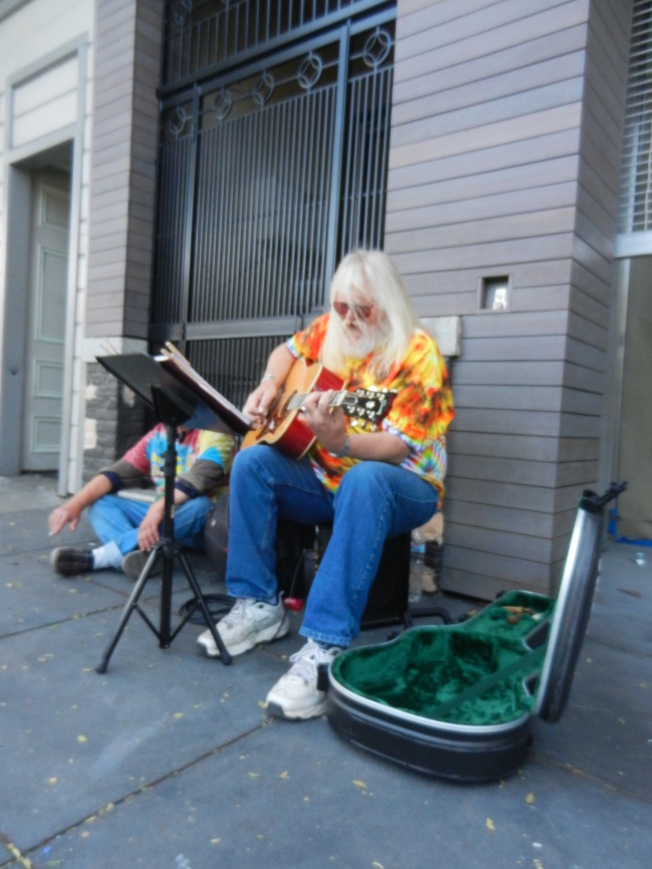 Just another spring afternoon in the Haight to the people that live there.

Sometimes whilst practicing The 30 Shot for street photography, I will point the camera directly behind me and take pictures–having no idea what the camera might find. Another luxury of digital cameras; pixels cost a lot less than film, and no one has to see the 90-95% of the pictures that don’t work out.

But 5-10% of the time, the point-and-shoot finds something like this, a group of toddlers on the move getting their first taste of public transit:

OK. This might have some potential, but it will require some work.

First, in the grand tradition of street photography, a black-and-white approach.

All edits performed in iPhoto. I kept to the original proportions of the shot, which left a little much foreground, plus the subjects of the picture don’t really stand out as much as they should. So this time, and 8×10 crop, keep the color, and make a few adjustments to bring out more detail.

The red makes such a huge difference. My only regret (possibly fixable in Photoshop Elements) is that the face of the woman on the left is still a little too dark, although I do like how the woman on the right appears as the leader of this expedition/training session on how to ride public transit. Fairly satisfactory, pending future work. 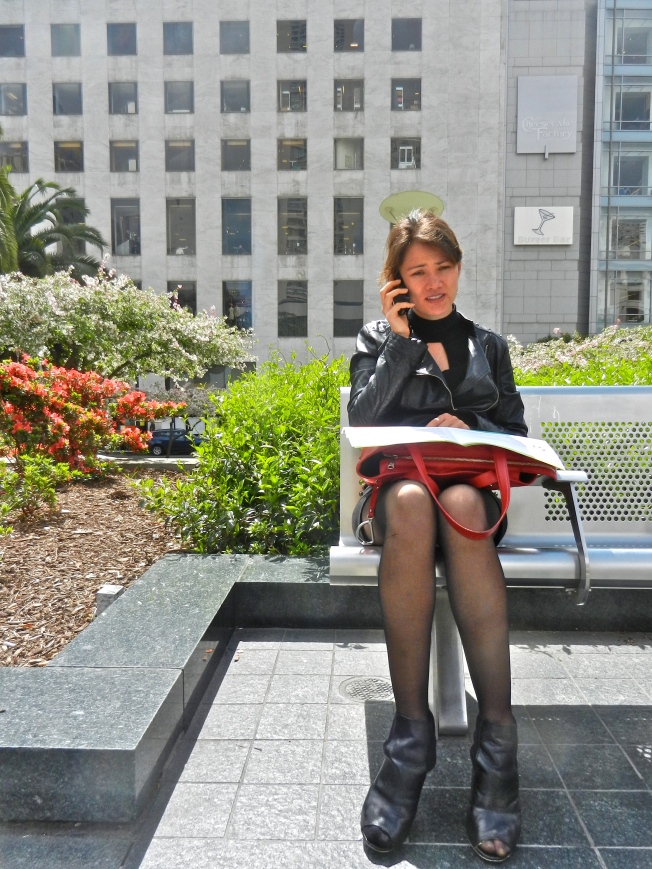 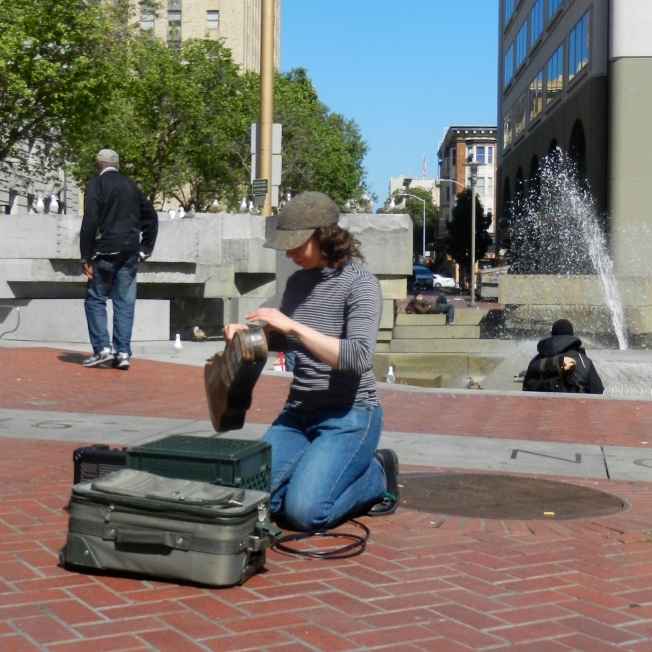 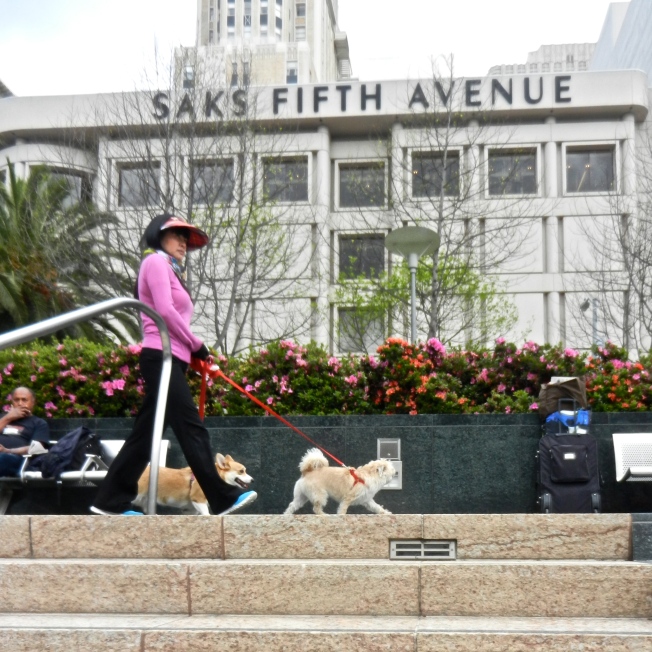 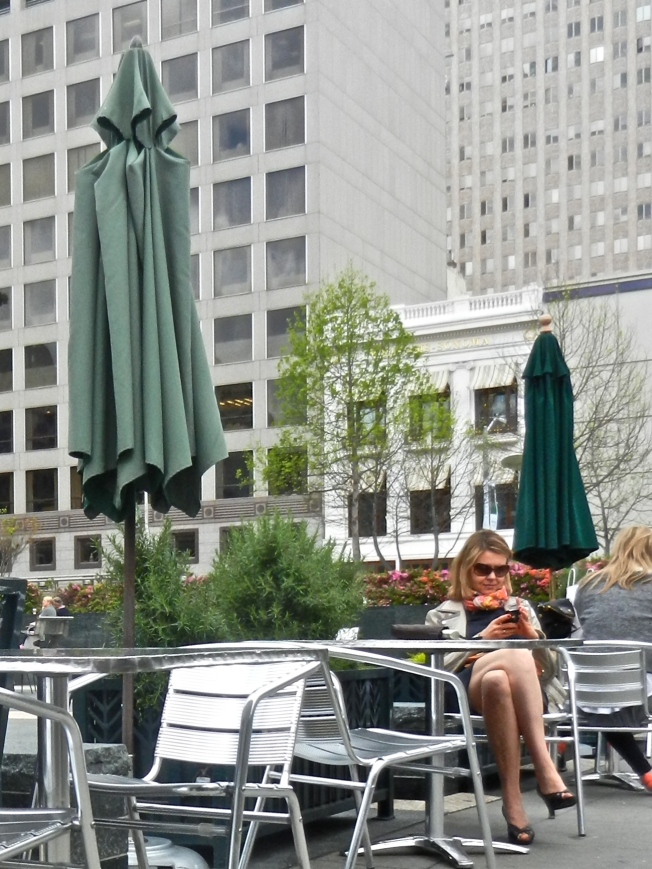 I’ve posted quite a few picture puzzles (such as this one, that one, and another one), but while going through my recent set of street photographs, I discovered a quartet with a repeating theme: pairs of humans. Indeed, speaking of pairs, I took one pair in front of City Hall and another in front of the Academy of Art on New Montgomery. 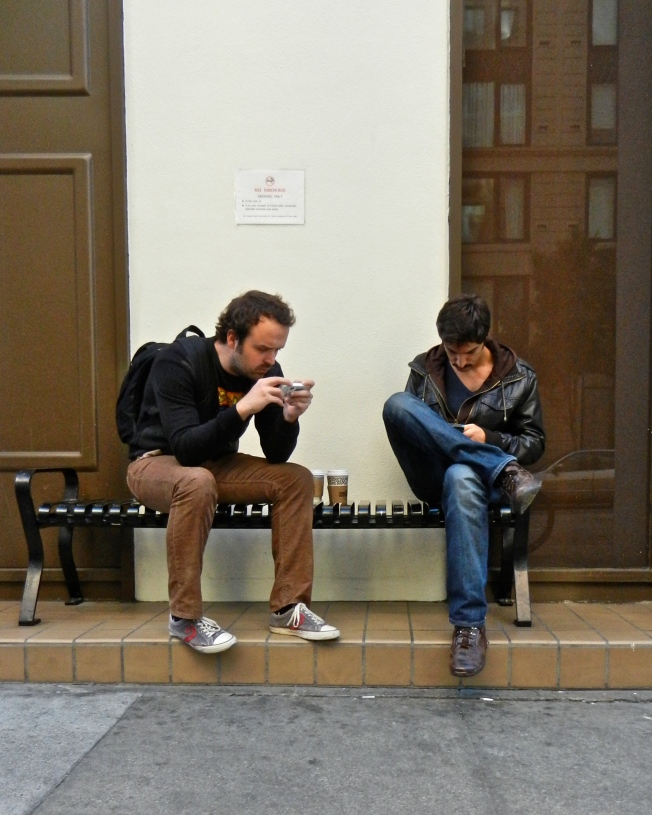 Take your time, have another look; which one is different and why?

OK, first of all, the trick picture is the bottom one; it’s the only one with one man and one woman, but that represents the only difference.

The correct picture is the second from the top. It differs from the others in two ways:

Hope you had fun with this one.